Tag: harbinger of the storm

Been remiss in posting these, but very happy to reveal the new look for Obsidian and Blood. The ebooks will be sold through JABberwocky: they’re currently trickling their way through the system (I spotted them at Amazon and Kobo, but other retailers don’t yet have them). Will update when I have more info!

Yup, that’s right, you can buy Obsidian and Blood, the massive omnibus containing the series of Acatl’s adventures, plus all the short stories (they’re all in the ebook edition but not in the print one due to space constraints; if you buy the print edition, you’ll get a link to download the ebook supplement). Get your complete trilogy now! 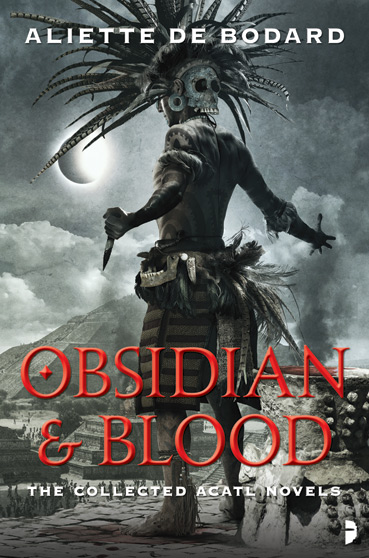 More info, including buy links, here. I’ll be guest posting at various places over the Internet, though it’s going to be a very short blog tour…

Now if you excuse me, I have a synopsis to polish the heck out of…

Mostly catching up on post-VN stuff…

-The cover of the omnibus edition of Obsidian and Blood has now been released: remember the uber-cool Larry Rostant cover that graced the French edition? Well, now it can be in your living room, with the complete Acatl novels. We’re currently discussing what will go in the omnibus beyond the text of the three novels, but I expect there’ll be bonus extras.

-My Nebula Awards interview (from last year) by John Ottinger III, is now up at the SFWA website–I talk about cooking, diversity in genre, and my fave bools with fabulous settings. Thanks to the tireless Charles Tan for organising everything, and to John for the perceptive questions.

-I will be Guest of Honour at the British Science Fiction Foundation/British Science Fiction Association AGM/mini-convention, on June 9th in London, at the Royal Astronomical Society. The other GOH is astronomer Marek Kukula. I’m also likely to hang around in London for the weekend (basically, I want to avoid getting up early and returning late, so I’m looking into being there Sunday as well). More details as I have them.

(PS: as some of you on FB and Twitter know, I jammed my right hand in a steel-reinforced door. I’m currently typing with my left hand and an index finger, so I’m not exactly fast on my feet at the moment. It’s much better than it was Tuesday night though, and I don’t think anything is broken. But apologies if I owe you long mails or edits, I can’t handle those well at the moment)

(ETA: yes, I’m aware it’s still Friday by 30 minutes… I screwed up with my posting system, and I don’t feel like undoing the automatic twitter and FB notifications)

So, a very quick update, because 15+ people are showing up tonight tomorrow night at my house, in order to see off the Lunar Year in style (ok, I lie, nothing to do with that. We’re housewarming with a bad sense of timing).

–D’Obsidienne et de Sang, the French translation of Servant of the Underworld, would appear to be a finalist for the Prix Masterton, a French literary award for SFF and horror (mainly geared towards horror and dark fantasy if the list of past winners is to be believed). The shortlist includes China Miéville’s The City and the City, and Gail Carriger’s Soulless (opening novel of a series which, amusingly, I’m reading right now) Er, wow? (and yes, the irony of being listed under “Fiction translated into French” has not escaped me).
-Couple Obsidian and Blood spottings: Cynthia Ward mentions both Servant and Harbinger in her end-of-year recap for Acqueduct Press, Harbinger gets noted by Duncan Lawie in his end-of-year review for Strange Horizons; Jacob at Drying Ink (who did this amazing interview with me a while back) ponders why you should read Historical Fantasy in front of a rather fetching cover of Master of the House of Darts
-hum, did I mention “The Bleeding Man” was going to be in Ian Whates’ Dark Currents, an anthology debuting at Eastercon which includes Adrian Tchaikovsky, Adam Nevill, Tricia Sullivan, Rod Rees, Nina Allan, Andrew Hook, Finn Clarke, Lavie Tidhar, Jan Edwards, Emma Coleman, Rebecca J Payne, Sophia McDougall, Una McCormack, Neil Williamson, V.C. Linde? No, I don’t think I did (I’ve known for a bit, but it wasn’t public).

I’m working on an SF story involving probabilities, and finally got in my nominations for the BSFA (short fiction, since I didn’t actually read any 2011 novels except for the aforementioned Gail Carriger (Heartless, which technically I haven’t started, having just downloaded it to my ereader).

Actual content to come, including mini-reviews of Elizabeth Bear’s Range of Ghosts (short version: you have to pre-order this book now), and David Gemmell’s Troy.

First off–hats off to Nathan McKnight, who has produced an Obsidian and Blood glossary for the Kindle, which you can use to call up characters’ names and special meanings. If you’ve always wanted to dip into the books but found the names too troublesome, the glossary is your friend! Download it here.

Oh, and, now that AR has officially announced it: there will be an Obsidian and Blood omnibus! Called Obsidian and Blood, it will gather all three books in one handy paperback (or ebook), and will be released in July 2012. More details here (not much for the moment other than ISBNs, but there should be some cover art at some point).

Costs £13 or $16, depending on whether you’re in the US or UK, and £8 as an ebook, about or less than the price of two volumes–so, if you’ve got fewer than 2 Obsidian and Blood books and want a complete set in a nice package, you know where to head…

Meanwhile, if anyone’s read Master of the House of Darts and wants to post a few reviews on amazon, I’d be very grateful, ’cause I can’t say the book’s getting a lot of attention at the moment…

Over at Speculate!, Brad Beaulieu and Gregory A Wilson are running a three-week special on Harbinger of the Storm: this week is the review of the book; next week will be an interview with me, and the following week will focus on writing techniques used within Harbinger.

Many thanks to Brad and Greg for the opportunity–not only did they read and dissect the book from cover to cover, they also arranged a three-way chat on Skype across three different time zones on a weekday, which is nothing short of heroic.

The podcast has featured authors such as K.J. Anderson, Patrick Rothfuss and N.K. Jemisin, and Brad and Greg have a palpable and infectious enthusiasm for all things genre. Go listen here, and check out past episodes, too!

In other shameless news, I opened my copy of Interzone 234 to discover that “The Shipmaker” had taken 4th place in the Readers’ Poll (behind Nina Allan’s “Flying in the Face of God” and two neat Jason Sanford stories), and that the illustration by Richard Wagner had tied for 1st place. Wow…

Had a lazy weekend, which involved much writing, eating Russian food (thanks to a friend who made us discover borscht, dressed herring, pierogi, and grilled pork), and of course Vietnamese food (a rather copious shrimp curry, thanks to my grandma).

Entering my second-to-last week of the job; also, entering French summer, which means everything suddenly is going very slowly, and people are unavailable… (frustrating). On the plus side, this week is the annual picnic of the department; I volunteered for salad. I hesitate to make bò bún, but I think I’ll go for a more classical French or Italian dish, if only because leftovers are more easily recycled.

In other, more exciting news, slowly filling in the holes on the novella, and answering a couple questions about the French translation of Harbinger of the Storm. The new novel project is going to be, er, an old one, ie revising Foreign Ghosts [2] before it is sent out. (with a side order of brainstorming sequels).

[1] Apologies for the inevitable spelling/usage mistakes: I’m doing my best to retranscribe from Cyrillic, but Russian is nowhere near my native language…
[2] Foreign Ghosts is the Xuya novel. In the words of the blurb I wrote a couple years ago:

The year is 2009–but the world is profoundly different. China’s discovery of America before Columbus has given rise to a West Coast ruled by Xuya, the former Chinese colony. Now, instead of San Francisco, the bustling metropolis of Fenliu is Xuya’s second-largest city, where Irish-Americans walk side by side with Aztec warrior-spies, and the vermillion-painted houses of Xuyan gentlemen-scholars contrast with the grime of Inca clan-compounds. Transportation is done by aircars and maglev trains; and technologies such as network sockets, communicators and weapons are routinely implanted into human bodies.

In this bewilderingly foreign world, PI Jonathan Brooks is desperately looking for a way to fit in. His latest gamble was to rent a flat in one of the posher Xuyan areas of town–but it backfired with the flat turned out to contain a cache of illegally imported mummies. Expropriated and considered a suspect, Brooks must discover the truth and clear his name before he is arrested and tortured.

But Brooks’ hurried and careless investigation may have unintended consequences: Fenliu is a city of many cultures, perpetually poised on the cusp of dislocation, and the racial riots of five years ago need only the flimsiest of excuses to flare up again…

By the way, I’m giving away five copies of Harbinger of the Storm via goodreads–if you happen to be interested, you can hop on over there and check it out. It’s open worldwide.

Harbinger of the Storm

Check out the new Salon Futura, in which Cheryl Morgan, Mike Carey, Jon Courtenay Grimwood and I talk about crossovers between crime and speculative fiction. On my end, I found the discussion and breadth of knowledge fascinating–thanks to Cheryl for thinking of me, and to Mike and Jon for being such awesome people.
(there were some technical glitches which resulted in much swearing at BT, but nothing that should spoil your enjoyment of the show).

The rest of the issue is equally intriguing, with looks at new crime/spec fic merges, interviews with Ian McDonald and C.E Murphy, and lots of other appetising features.

Meanwhile, I shall go back to my stir-fried beef with onions (lots of onions leftover after a rather disastrous buy, had to do something with them…)