I couldn’t make it to the Codexian breakfast Saturday morning because I had an early panel about medieval technology. I had expected it to be sparsely populated like my previous panels–however, no such luck, as I found when arriving that the room was packed…
After a brief introduction, the moderator suggested that my co-panelist (Phil Nanson, an expert in medieval weaponry) and I each started out by giving a 20-minute talk on the subject, and follow up with questions.

The con was great: met lots of new people and had lots of fun. Sunday was spent, as envisioned, on sheer adrenaline, going through two panels and a reading with a mounting heartrate, before rushing back to the hotel room to change into my evening dress for the Hugos.

And the Hugo Awards…

Well, it’s a good thing that they started out with the Campbell, which saved us nominees a lot of freaking out. David Anthony Durham won and made this awesome and very touching speech about community acceptance.

I subsequently was surprised to find out that though David led in all rounds of voting, by the end he had 161 votes to my 158, and that three-vote difference was all that separated me from actually having to improvise a speech up there…

Ah well. Such is life. I’m not complaining: I did take second place, and overall it’s been a really awesome year for me. Even though I didn’t win, I’m honoured to have just been nominated and to have stood in such good company. And I’ll make sure to keep an eye on all my fellow nominees, as I’m sure they’re off to great things.

Thanks a lot to everyone who voted for me; and special extra thanks to the Codex/Liberty Hall voting block, T.L. Morganfield, and Chris Kastensmidt for clapping and screaming so loud when my name was announced as part of the list of nominees. You guys totally made my night.

A couple of wins that had me really thrilled: Electric Velocipede took Best Fanzine–huge congrats to John Klima, who I’m sure would have loved to be there to collect his award.
Congrats to Elizabeth Bear for taking the Hugo for Best Novelette (she totally rocks), and to Ann Vandermeer and Stephen Seagal from Weird Tales for Best Semiprozine Hugo. My ROF illustrator Frank Wu took Best Fan Artist (and nearly broke something while running up the stage).

There will be a more detailed post when we come back from Canada and offload the camera’s pictures. In the meantime, here’s a picture of me in my Hugo outfit, courtesy of Cheryl Morgan: 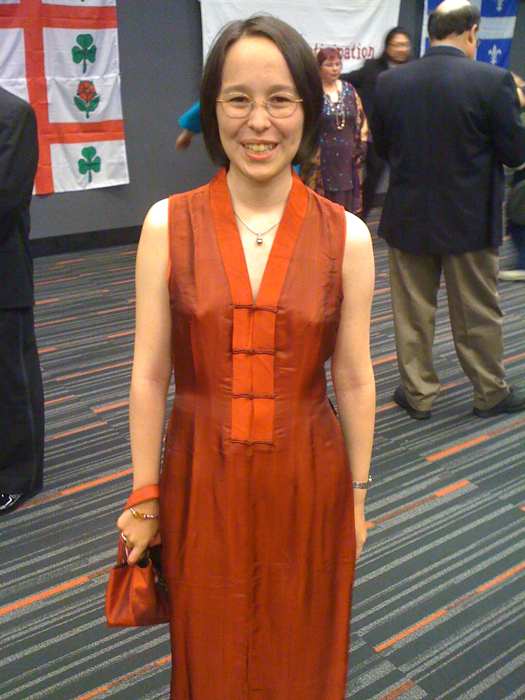 -Illustration of “Ys” (story in Interzone 222) here, in colour, courtesy of the awesome Mark Pexton

-Came home to my May 2009 Locus, to find, rather to my surprise, a review of “The Lonely Heart” by Rich Horton (in a focus on the Campbell Award Nominees, which had lots of good stuff to say about Felix Gilman’s “Catastrophe” in Weird Tales, Tony Pi’s “Silk and Shadow” in Beneath Ceaseless Skies, and Gord Sellar’s “Cai and Her Ten Thousand Husbands”:

Aliette de Bodard has caught my eye with some strong traditional fantasy tales and some fine work set in an alternate history ruled by the Aztecs”. “The Lonely Heart”, from Black Static for February/March is a different and darker tale (though de Bodard has always shown a great deal of range in both subject matter and tone)…

(the issue also had nice things to say about J. Kathleen Cheney’s “Early Winter, Near Jenli Village” in Fantasy Magazine, which you really should read if you haven’t)

-Also was pointed out to this by Scott H. Andrews: a list of writers in semiprozines to watch out for, in which, hum, I appear a bunch of times… (I second the recommendations for Shweta Narayan and Angela Slatter, BTW. They both write terrific fiction).

In non-selfish self-promoting links, I’ve found a new webcomic to get addicted to: Freakangels by Warren Ellis and Paul Dufield. Set in a post-Apocalyptic, flooded London, this focuses around the Freakangels, a group of people cursed with strange powers. It soon becomes clear that it’s their combined powers that ended the world, and that they’re trying to make amends for it by making Whitechapel into a haven of peace for refugees in a world gone mad. Things would be going swimmingly well, were it not for the twelfth Freakangel–Mark, the one they expelled from their group, and who now plans to kill them one by one… It’s got great character interaction, vivid art and a plot that bites. Not sure where it’s going or how long it’s going to take to get there, but it’s a super nice ride.

(Iain Jackson had a column over at Strange Horizons about the best comics of the year, and I intend to check several others of those out, looks like a good list)

Finally got myself motivated to download the Hugo Voter’s Packet. Wow, lots of good stuff here. Even discounting those books I’ve already read (Acacia, Thunderer and Little Brother), there’s still plenty to sink my teeth into. I’m becoming an adept of Stanza, nifty software that allows me to read ebooks on my ipod. Not optimal in a sunlit bus, but kind of neat all the same.

I’ve seen that the ballot is now online and that you have until the 3rd of July to vote. Almost finished the short fiction; now I need to get cracking on the novellas and the novels… (and boy, does it feel very weird to see my name down there for the Campbell, even if it’s not a Hugo).

The packet includes three of my short stories (“The Lost Xuyan Bride”, “Obsidan Shards” and “Autumn’s Country”); I’ve also reordered stuff on my website to put stories directly online (the Packet ones, and two extras, in addition to the stuff I’ve published in online zines).  I’m still looking for a way to list subpages within a post (I’ve found the wordpress syntax, but it seems to be working only in the sidebar).

I also have an author page up on Facebook, mostly following the example of Gareth. I suppose every little bit helps 🙂

And, as said above, I’ve finished up my Cambpell reading by the two novels I’d ordered a while ago: Thunderer and Acacia. Two very different beasts: a urban secondary-world fantasy with hints of Dickens and fabulous worldbuilding (indeed, the city of Ararat itself is as much a character as the people passing each other on the street), and an epic fantasy of political intrigue, a clever reflexion on how history is written by the winners until even the old myths become forgotten. For my money, I preferred Acacia, mainly because I’m a history buff, but both are pretty good books.

Currently working my way through Lian Hearn’s Tales of the Otori, superlative fiction set in a world inspired by Medieval Japan. Very well-researched, very well-written, and obviously told by a master.

And, since I’m between novels at the moment, I’m hammering away at an alternate history that involves a lot of weird science. 3000 words in, halfway through.

“TGIF” is pretty much the only word that can be applied to the week. I’m exhausted, and all ready for the marathon Saturday afternoon with friends 🙂

-The Hugo Voter Packet is now live, courtesy of John Scalzi. There’s great stuff in there, six novels (four of the Hugo nominees, the scaringly good Acacia and Thunderer by fellow Campbell nominees David Anthony Durham and Felix Gilman. Also short fiction samples from Tony Pi, Gord Sellar, and yours truly (a samplet of the stuff I put up on my website). You have to be a member of Anticipation to download it–but isn’t all this nifty stuff worth the price of admission?

-Speaking of the Campbell… congratulations to David Anthony Durham for being selected as part of the newest crop of Wild Cards writers.

-Last Campbell stuff, I promise 🙂 Mary Robinette Kowal has finished interviewing all five of us on her blog.

–J. Cheney has a good story up at Fantasy Magazine, “Early Winter, Near Jenli Village“, and a nifty interview done by Marshall Payne.

-Stephanie Burgis on why agents matter, and her moving account of the genesis of her Regency YA trilogy (which, incidentally, is near the top of my books to order)

BF and I are still deep into the Canada guide, trying to work out what we’re going to do before Anticipation (looks like there’s more than enough around Montreal to keep us busy for a while).

Off to spend some time with Hamster Sister (she had a bunch of  wisdom teeth removed–some swelling happened, obviously…)