So, remember Yoko Tsuno, those bandes dessinées with the Japanese electrical engineer I loved when I was a child? [1] As I was saying in that other blog post, they’ve re-edited them with new material which includes author introductions. This is definitely one of those cases where less is more–to learn that author/artist Roger Leloup created the character because he wanted an exotic Oriental character is definitely… not what I really needed to read (the introduction includes a bit where he says that bringing Yoko back to Japan was difficult because she was no longer exotic, and that Japan was hard because he couldn’t make things up. I haven’t tried to reread that actual BD, but it has ninjas and multiple references to samurai honour and losing face as some sort of ultimate deterrent in Japanese culture. Arg arg arg).

Bonus points for his mention that he gave her a Chinese grandmother because he wanted her to combine Chinese sensibility with Japanese efficiency. Arrrrgggg racial stereotyping much, anyone?

[1] Asian geek with a spaceship who was smarter than the boys, the first time I’d seen that kind of character around. Love at first sight for many reasons.

Been meaning to post about this for a while–among the stuff that I read when younger were several bandes dessinées–many of which haven’t been translated, and I thought I’d do a post (and yup, this also explains the icon). Yoko Tsuno was one of the BDs I enjoyed most (the other being a tie between the very first volumes of heroic fantasy Aria, and Gaston Lagaffe). Furthermore, I was happy to see recently that they still held up quite well to reread years afterwards–and it’s not the case for all BDs, because they were primarily written for a child audience and some of the plots can clunk quite painfully when you’re an adult. 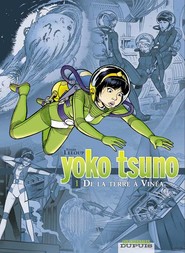 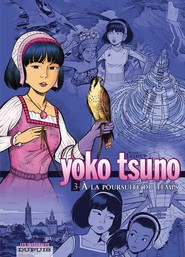 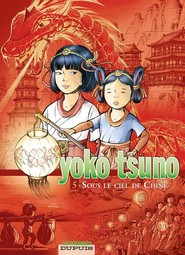 It’s a bit hard to describe the series. Like a lot of BDs, it’s actually written by a Belgian, Roger Leloup–and has been going on for a while, since 1970 and with more than 26 volumes published. It basically follows the adventures of the eponymous character Yoko Tsuno, a Japanese Electrical Engineer living in Brussels–and most of the modern-day series is set in Belgium. However, Yoko is soon embroiled in different categories of trouble: she meets the blue-skinned Vineans, aliens who have taken refuge on earth after their planet was destroyed (and later returns to help settle Vinea); she travels around in time from Indonesia to an alternate future in which Earth was destroyed; and she is generally embroiled in shennanigans ranging from scientific experiments in cryogeny to giant iguanas within the Hong Kong Bay.

She’s assisted in this by Pol and Vic, two boys who start out as her cameramen and later graduate to official sidekicks (and love interest). Other recurring characters include Rosée (“Morning Dew”), Yoko’s adopted daughter; Monya, a girl from the future who inherited a time machine; Khâny and Poky, the Vinean twins (albeit slightly time-dilated, since Khâny is an adult, and Poky a child about the same age as Rosée); and Ingrid, the German organist who has a gift for getting embroiled in Gothic intrigues.

There are lots of things I love about this series: the art is very often stunning, especially when drawing on real-life settings (one of my early favorites, The Edge of Life aka “Frontière de la Vie”, takes place in Rothenburg, a lovely German town that retains most of its medieval buildings). The charaters, considering it’s a BD in 47-page installment, are well-drawn (I especially like Vic, who desperately tries to appear competent and manly, but is frequently outclassed by Yoko). The BD touches on several themes from the morality of changing the past to the ethics of biomanipulation, but never preaches; and the latest episodes are still very strong–a pretty rare feat considering how long the series has been going on.

And of course, there’s Yoko herself, who’s the multi-competent badass (but it’s a nice change to see that she solves problems more through science than through action); who never hesitates to let her sense of what is right guide her; and who straddles several worlds from Asia to Europe [1]. Of course, all that never goes very far because it’s a BD and not a novel, and there’s not much room for character introspection, but still… still, no fan service, strong women characters, awesome worldbuilding, and strong plots. What’s not to like?

ETA: I’ve discovered that Cinebook, the same guys who translate Blake and Mortimer and Thorgal, have translated a couple of eps. You can read about them here, and they should be available on amazon, too! I’d recommend “The Time Spiral”, “The Dragon of Hong Kong”, and “On the Edge of Life”. “The Time Spiral” is pretty much one of my series favourite.

(and yes, Yoko and Rosée are my newest icon 🙂 )

[1] I have no idea how much of all that stuff is accurate. I haven’t seen anything horrendously wrong, but quite possibly the Japanese and Chinese characters are off (the French/Belgian stuff is pretty accurate, but that’s not surprising). Still, the series gets points for pretty much taking the ethnicity of its main character(s) for granted, and being generally so strong on actual ethnic and gender diversity (a lot of Franco-Belgian BDs can be awfully parochial, and considering the first few eps date back to the Seventies, the record is pretty impressive).
ETA: though, given that the BD was translated into Chinese by a Hong Kong publisher, the depiction of Chinese people can’t be that horrendous…