It occurred to me I did this kind of post for Ancient China, but never got around to it for the Aztecs…

–The jungle. Ok, if I had a cookie every time the romantic and torrid jungle atmosphere was mentioned in connection with the Aztecs, my kitchen would be overflowing. The Aztecs were a people of Central Mexico, with NO jungles whatsoever in a radius of several dozen kilometers. Their country was wet marshes; and after the wet marshes, high mountains with dry and cold weather. To get the jungle, you had to go down to the south–a week’s march or more, beyond the boundaries of the empire for most of its existence–, and enter the bits that are now the South of Mexico and Guatemala. Those are Maya lands (see below for Aztecs, Mayas and Incas). There is a lot of jungle-based imagery in Aztec mythology (jaguars and quetzals, for instace), precisely because those jungles were far-off lands the Aztecs didn’t see every day and thus acquired an aura of magic and preciousness, a bit like the Orient in the 19th Century became this glamorous place where everything was larger than life.
And Apocalypto is a terrible movie about Mesoamerican people, incidentally (it depicts life among the Maya, but does a terrible job of it).

–Aztecs, Mayas, Incas, it’s all the same, isn’t it? Er, yeah, sure. Just as the Finns, the Spanish and the Ancient Greek are secretly all one people. The Aztecs, as said above, occupied the centre of Mexico from the 14th to the 16th Century; the Mayas held the South of Mexico, Guatemala, Honduras, etc., for a longer time than this (the last Maya city fell in the 17th or 18th Century, and the Mayas had been around for a while, even though their culture had changed a lot by then). The Incas were in Peru, which is more than three thousand kilometers from any of the aforementioned countries.

–The Empire: or lack thereof. You often find references to the “Aztec Empire”, which immediately evokes a political structure akin to the Roman Empire, ie a unified territory under the rule of a centralised administration. Truth is, the Aztecs were nowhere as organised. The word “hegemony” would be a better description of how they ruled: strictly speaking, they had under political control only a very small bit (the centre around their capital Tenochtitlan). When they conquered a new city-state, they didn’t integrate it by modifying the power structure: they tended to keep the ruling family in place, and force them to pay tribute to Tenochtitlan. And that was pretty much it. There was no attempt at political, territorial or even cultural homogenisation: the Aztecs spread by extending their tribute area, and you didn’t have an empire so much as a collection of loose city states owing a very loose form of allegiance to Tenochtitlan. (the Incas, on the other hand, were very good at the Empire business, sometimes relocating entire populations in order to make sure the political cohesion was preserved). It’s part of the reason the Aztecs fell so quickly: their hold was so tenuous (but still grudgingly felt, considering their demands for exorbitant tribute), that the Spanish had no trouble convincing the rulers of the neighbouring city-states to support them instead of the Aztecs.

–All bloodthirsty savages, I tell you: not going to linger on that one because I’ve harped on it enough, but of course not true. Human sacrifice is a bit of an arresting custom, which means that any other achievements tend to get lost under the weight of disapproval. The Aztecs were awesome astronomers, pretty good physicians for a medieval time period, and they also had a pretty equalitarian society (again, for the time period), with possibilities for commoners to reach pretty high on the social ladder, and a fair amount of women’s rights (right to divorce and inherit, for instance) that most medieval societies tended to forget altogether.

–We’re very well informed about what the Aztecs were like: ha. Mostly, not that much. The conquistadores did a terrific job of destroying the Aztec culture as they found it: there are Aztec descendants, and a handful of codices, but the evidence of how the Aztecs lived is terribly thin. As far as monuments go, again, there are very few Aztec monuments left: the shiny pyramids everyone thinks of when the Aztecs are mentioned tend to be those of Teotihuacan (which predates the Aztecs by 5 centuries or more), and of course Mexico City was built on the ruins of Tenochtitlan, which means very few remains of the Aztec capital.

For those who might be interested: my novelette “The Jaguar House, in Shadow”, first published in Asimov’s, July 2010, is now available for free on my website for your reading pleasure. (and, of course, if you happen to be in the right fraction of the population, it’s eligible for the Hugos/Nebulas/Locus Awards/Asimov’s Awards etc.).

Jason Sanford listed it as one of the three best novelettes in Asimov’s for 2010; so did Richard Horton; and it’s already received at least one Nebula nomination.

Go here to read it, and don’t hesitate to pop back here and tell me what you thought!

Writer friend T.L. Morganfield has just revamped her website with fabulous illustrations of Aztec characters from her novel–go check them out!

Couple interesting discussions/rants/funny stuff about steampunk courtesy of Charles Stross, Cat Valente and Cherie Priest–echoing some of the stuff I was saying earlier about what the 19th century really looked like.

Guess I picked a fine time to write Aztec steampunk… (seriously, though, I’m sticking with it for the moment, because it might not be rigorous science or rigorous history, but it makes me broach lots of interesting subjects. Don’t really read enough Victorian steampunk to comment on the above links, but it certainly makes one think. Giving me lots of story fodder, if nothing else).

So, the synopsis for book 3 came back from AR towers with a couple of very perceptive editorial comments. I’ll need to sit down and rework it, but I’m going to start working on it as soon as I’ve finished the current short story.

Temp title is “Master of the House of Darts”, which has the inconvenient of not fitting on a cover, so it’s only a placeholder until I have a brilliant idea for an alternative title. Going to be referred to as MHD/book 3, methinks… Focusing on human sacrifice, the Aztec way of waging war, and Tenochtitlan’s relationship with its neighbours.

And for those French-speakers among you, Eclipse, the imprint of Bibliothèque Interdite, which bought the French rights to the series, has announced its initial lineup, which most notably includes Cherie Priest’s Boneshaker. Haven’t seen the actual books other than the mockups, but I do like the sober look very much (and they’re not systematically reordering a cover if they like the original version, which is interesting). Also, I’m a big fan of their big shiny banner (see below).

Via Andy Cox, the title spread for my upcoming “Age of Miracles, Age of Wonders” (forthcoming in Interzone 230, the very next issue). 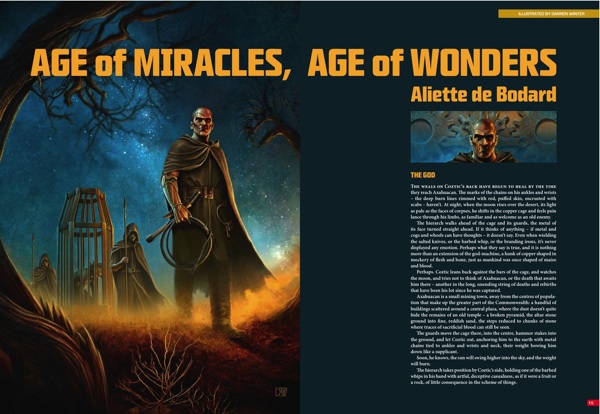 Er, wow? I am *so* glad Interzone is back to full colour. It looks awesome! (plus, mechanical men. And fallen gods. And Aztecs. You can’t really go wrong with any of those).

The wonderful M.G. Ellington has been kind enough to lend me some space on the Apex blog, where I ramble on what I should have done when writing Obsidian and Blood:

When I settled down to write my novel, the Aztec noir fantasy Servant of the Underworld, I had only the vaguest idea it might turn into a series. My first thought was to finish the darn thing, and not really to map out what might be happening to my characters after the plot was over.

That was 2007; now we’re in 2010. I’ve sold Servant and two more books in the Obsidian and Blood trilogy to Angry Robot; I’ve turned the sequel, Harbinger of the Storm, to my publisher; and I’ve just completed a tentative synopsis for the as-yet-untitled book 3. Looking back to how I wrote the series, there are a few things I did right, and a few things I should have paid more attention to.

Go check it out!

In other linkage news, Mike Johnstone reviews the February 2010 issue of Asimov’s, which contains my alt-hist “The Wind-Blown Man”:

Her prose deftly taps into the atmosphere, rhythm, and thoughtfulness of Chinese tales (Buddhist, Taoist myths): it is measured, unhurried, soothing; it suggests a depth just tantalizingly out of reach.

That’s all for now. I’ll go back to RL stuff and programming (and %% implicit conversions).

So, I’ve recently noticed I started writing Aztec steampunk (“Memories in Bronze, Feathers and Blood”, up at Beneath Ceaseless Skies, “Age of Miracles, Age of Wonders” forthcoming in Interzone, and “Prayers of Forges and Furnaces”, which I haven’t sold yet). I’ve had several people mentioning how it’s a bit odd to be mixing Aztecs with the steampunk aesthetic, and that set me wondering about where I was coming from when I was writing that kind of stuff.
END_OF_DOCUMENT_TOKEN_TO_BE_REPLACED 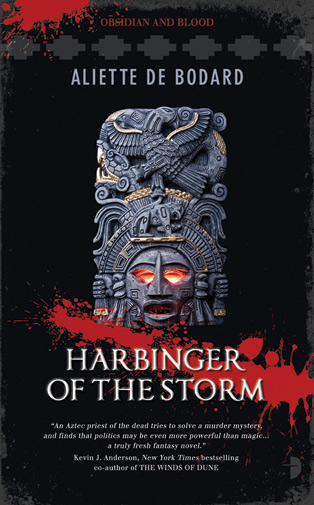 And here’s the cover to go with the blurb! Isn’t it so pretty? (note that I have different bloodstains on my covers–you can now collect them all *g*).

Coming January 2011 in the UK/Australia and February 2011 in the US/RoW. With star demons, conniving high priests and generalised political plotting. Oh, and more ahuizotls, because fingernail-eating monsters always make everything better.

And while I’m at it, another (very nice) review of Servant of the Underworld at Cold Iron and Rowan-Wood.

Lookie lookie, I found this awesome illustration for my Xuya continuity story “Fleeing Tezcatlipoca” (out now in Space and Time Magazine), courtesy of Alan F. Beck.