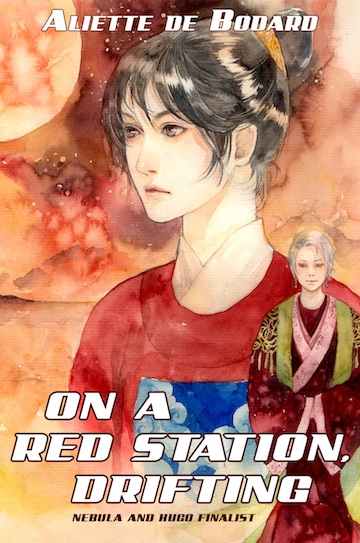 So… I thought it might interest people to share my experience with epublishing my novella On a Red Station, Drifting. What follows is a few disjointed thoughts on what I did and how I did it.

-Why: the original edition of On a Red Station, Drifting was a paper, limited edition hardcover with no ebook edition planned; I got lots of requests for an ebook edition, especially from readers not in the UK. I figured that since the market for novellas was so freaking limited, I might as well dip my toes into the world of self-publishing and see what happened.

-Cover art: I decided to get new cover art for the ebook version, to differentiate it from the paper one (which was a limited edition, and whose cover also had the slight problem of being far too busy to display at low resolutions, a definite handicap when dealing with buying ebooks). I browsed a couple things on deviantart (seriously considered using a couple existing pieces, but one was too dark and the other one at a large horizontal format and therefore quite unsuitable for an ebook cover no matter which way I turned the problem). I ended up commissioning Nhan Y Doan , whose work I had long admired, for a watercolour with the two main characters on it.

It’s a bit scary to commission an artist; many thanks to Colin Tate, who gave me pointers for navigating the entire thing. Basically I described what format I wanted; and the “feel” of what I was going for by showing the artist a few covers in genre with a predominantly red/orange background (I wanted red for obvious reasons); can’t remember everything I used, but one of them was Ian M. Banks’ Against a Dark Background. I also put in an excerpt from a scene that showed the interactions between the two main characters, and provided a summary description of both of them and their clothes, again using pictures as references. I was a bit scared of how it would turn out, but the end result was fabulous.
The cost of the commission was a little over 130$, to which I would have added lettering (which the artist didn’t provide)–except that the fabulous Janice Hardy very kindly did it for me, offering me several choices of fonts. I went for the one that most clearly appeared SF-esque, in order to counterbalance the soft watercolour design, itself an unusual choice for an SF novella.

-Conversion to ebook format: after much trying around, I used Scrivener for Mac plus the kindle converter KindleGen, which you can download on the amazon website. I found the instructions here useful, though I did end up having to fight a bit to get my part labelled as “book 1” and not “chapter 1”). For EPUB, same thing except no need for KindleGen. The files produced are pretty clean; I ran them past people with a Kindle (huge thanks to Stephanie Burgis), and on my own Kobo Glo, just to make sure that it generated OK.

-Pricing: after much dithering, I priced the book at $2.99, and a similar amount in the other Kindle stores. I wanted to take advantage of the royalty rate at 70% on amazon, and also didn’t want to sell the novella too expensive or too cheap–I had a look at similar books on amazon and found that they were all at slightly higher prices than this (or much higher in the case of Nancy Kress’s Before the Fall, After the Fall–except I’m not Nancy Kress!).

-Publishing: I published on Kindle Direct Publishing because, let’s face it, it’s the biggest ebook market. At the same time, I wanted to give people a chance to find the book through other distribution channels, so I went through Smashwords in order to complement publication on amazon (Smashwords takes a percentage of sales, but has the advantage of distributing across the board to Apple, Sony, Kobo, etc.–at the time I signed up for it back in May, it wasn’t possible for me to sell on B&N, for instance, because I wasn’t based in the US).

Gotta hand it to Amazon, it’s pretty simple to open an account and upload your book file once you have everything. I can get paid via bank transfer, which is handy (but I understand this isn’t possible everywhere, and that this can be a pain in the %%% when you don’t sell enough books to reach the minimum amount necessary for them to issue a check). Smashwords is also pretty simple, although what I did was upload the EPUB file direct without trying to format a compatible Word document, which I’m given to understand is more of a headache (I did end up fighting a bit with their uploading system, which flagged non-existent errors and wouldn’t let me publish).

Cheryl Morgan also very kindly offered to publish the book on her Wizard’s Tower Books ebookstore, which puts me in fabulous company as well as giving me a more targeted market.

The split from my sales so far is: 89% sales through amazon (all Kindle stores conflated), 8.5% through Smashwords (about 1/3 of these are direct smashwords sales, and the rest is a conflation of other retailers like Apple, Kobo…), and 2.5% through Wizard’s Tower Books.

-Stuff I wish people had told me before: the tax withholding from Amazon and Smashwords if you’re not a US resident. I didn’t know that 30% withholding was the norm, and that you had to fill forms to get them not to do that anymore (see here for handy guidelines if you’re not a US citizen and not living in the US)–and that it took up to 1-2 months for this to be taken into account.

-Accounting: Smashwords is great, they pay you at the end of a given quarter via Paypal and that’s it. Amazon is… odd. I still haven’t quite worked out their payment logic. They also account separately for every store and every royalty percentage (I get 70% within some countries and 35% within others), so reading the sales files can rapidly become a headache–not to mention the fact that for stores where I don’t sell a lot, I basically am not seeing any money for months. Well, I guess at least I do get paid at some point…

-End results: obviously the experiment is still ongoing, but overall I’m pretty pleased. I published in the leadup to the Nebulas, at the time the novella was announced as a finalist for the Hugo, Nebula and Locus Awards, which considerably helped visibility. I did a couple promo items (on SF Signal and other places), though due to pregnancy fatigue plus the headaches involved in selling our house plus buying a new one I wasn’t really aggressively marketing, and more relying on word of mouth. The first payment from amazon basically went into paying for the cover, but from now on it should be all profit (the kind of fabulous profits that will allow me to book my dream holiday to Mũi Né–hahaha wait, maybe not).

So, that’s my experience with ebook publishing–what about you? Have you done it yet, and how has it worked for you?