And the much-delayed pictures (the H still holds the pictures hostage on his computer. I filched a few that looked pretty).

The first two are of the Ngũ Hành Sơn (mountains of the Five Elements), better known in English as Marble Mountain: it’s a major Buddhist temple complex near Đà Nẵng (centre of Vietnam), which has a slew of pagodas and shrines on moutaintops, as well as temples carved within caves that are truly impressive. Easily my favourite place (though not very favoured by Western tourists; the crowd was mostly local) of the trip: serene and unearthly, and with fabulous views over the surrounding countryside. Easy to see why they built the temples here. 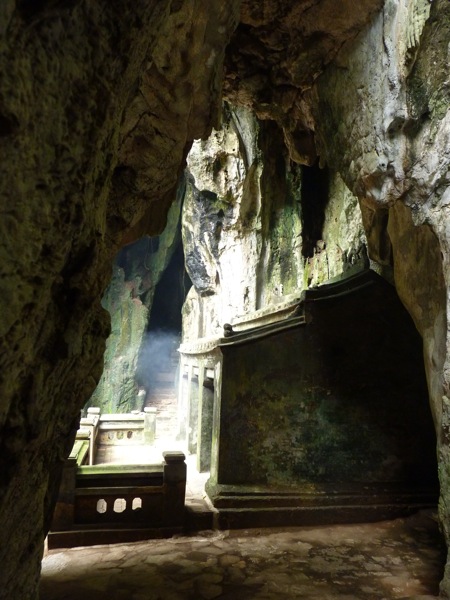 And this is the tomb of Khải Định, the second-to-last emperor of the Nguyễn dynasty: Huế is surrounded by the mausoleums of all the emperors–they’re all in very different styles, and this one is a striking fusion of Eastern and Western (see the octogonal pavillion vs the crosses that line the terraces). Inside, it looks a lot like a Vietnamese Versailles, with lots of ornate ceramics on the walls, and it has a golden likeness of the Emperor (the actual body is somewhere under the palace) and a shrine to honour his memory.