So, in order to celebrate the impending release of Master of the House of Darts (small reminder: you can see the trailer here), I’m holding a little competition.

Prizes are as follows:

–1st prize: your choice of EITHER:
-a glyph artwork (it’s from Guatemala I think), which will look fabulous with a frame and hung upon your wall, a signed copy of Writers of the Future XXIII, which has the very first Acatl short story with the original Marcus Collins artwork, and a signed copy of Master of the House of Darts. 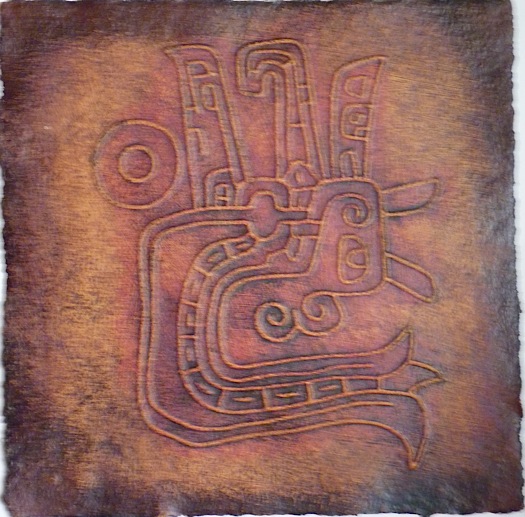 -a signed copy of Writers of the Future, a signed copy of Master of the House of Darts as above, and a tuckerisation. I will put a character with your name (adapted for correct ethnicity if the story requires it), and a few telling details in the next work I tackle. I’m hoping it’s Unclean Spirits, the Foreign Ghosts sequel, but if the series doesn’t sell and I never end up writing the sequel within a reasonable amount of time, I’ll shift it to an appropriate novelette. In addition, you will also get a sneak peek at the Vietnamese space station novella.

–3rd prize: your choice of signed book, either Writers of the Future, Servant of the Underworld, or Harbinger of the Storm.

The rules are as follows: I will put everyone’s names in a hat, and draw at random. Your name gets put in the hat as many times as you have points. Get points in the following manner (they’re all cumulative, so you can do several of those things at the same time):

1. 4 points for creating and posting your favourite Aztec-inspired dish (a few hints here, and you can also google “Aztec food” for plenty of other websites. Basic staples include maize, cactus, turkey, various spices and chillies, and cacao beans). I will NOT judge how authentic the recipe is, or even check to see that it’s eatable, but mainly how creative you are!
(however, do not try to sell me a hamburger as your favourite Aztec food…)
ETA: sorry, wasn’t clear. Post the Aztec dishes in the comments of this post or its LJ mirror.
2. 2 points for telling me, in the comments, your favourite character in the Obsidian and Blood books, and why. There’s a handy list of characters here if you’ve forgotten their names (which can always happen with Nahuatl tongue-twisters…)
3. 1 point for simply commenting, either on this blog post or on the LJ mirror
4. 1 point per repost of this on FB, LJ, Twitter, etc. (comment with a link to the post(s)/RT and I’ll credit you).

ETA: sorry, my brain went on holiday… You have until next Tuesday (Nov. 1st) to enter.

This is open to anyone, wherever you are in the world–so get cooking and reposting 🙂