Well, that’s it. I would seem to have become a published novelist. Today, my Aztec fantasy-mystery Servant of the Underworld hits the UK and Australia, courtesy of Angry Robot.

I can’t help flashing back to that time ten years ago, in London, when I first thought it would be awesome to write a fantasy in English–and all but killed the thought because my cynical self had just pointed out that fantasy was horribly complicated to write because of all that research, that English wasn’t my first language, and that I was bound to bungle it all. It took me ten years and a lot of wordage, but I’m awfully glad I decided to ignore the obstacles and go ahead anyway. Sometimes, things work out a zillion times better than you’d ever expected. 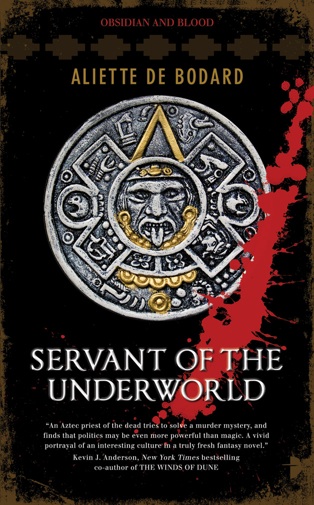 Year One-Knife, Tenochtitlan – the capital of the Aztecs. The end of the world is kept at bay only by the magic of human sacrifice. A priestess disappears from an empty room drenched in blood. Acatl, high priest, must find her, or break the boundaries between the worlds of the living and the dead. But how do you find someone, living or dead, in a world where blood sacrifices are an everyday occurrence and the very gods stalk the streets?

And there’s a new review over at Candyman:

…the author has thoroughly researched the language, customs, and such but uses it just enough to flavor her narrative, not over power it. The book reads more like a mystery rather than dark fantasy; either way, it’s very hard to put down. (…) This book is beautifully written and a pleasure to lose oneself in. (…) Please see for yourself and pick up a copy!!

Celebrating tonight with BF. Now all I need is an actual spotting of the book in the wild for it to feel real…