This is part 2 of a series of posts on the setting of my Aztec fantasy series Obsidian and Blood, as a leadup to the release of Book 1, Servant of the Underworld, published by Angry Robot/HarperCollins (more information here, including excerpts and a book trailer). You can find part 1 (the valley of Mexico and the Mexica Empire) here, part 3 (the Sacred Precinct and Mexica religion) here, and part 4 (Acatl and death in Mexica religion) here.
Any questions or comments welcome!

2. The City of Tenochtitlan and the Migration Myth

If the basin of Anahuac was a place of waters (see previous post), Tenochtitlan was the archetype of an island city. It’s been referred to as the Venice of Mesoamerica, and not without reason, as most of the city was laid along canals.

The city was built on an island in Lake Texcoco, a naturally defensible place. Three huge causeways (1-2km long each), linked it to the mainland, each bearing the name of the city they led to: Tepeyacac, Tacuba/Tlacopan, and Itzpalapan. Each of them was guarded by several forts, and by an additional defence mechanism: the causeways were made of sections of stone-and-mortars, which alternated with wooden bridges, easy to demolish in the event of an invasion. This would allow the island city to become a veritable fortress.

Tenochtitlan itself followed a grid pattern: urban planning had left nothing to chance (indeed, there was a set of officials in charge of city planning, who had to approve major building works), and the houses were neatly aligned along the canals and streets. Those houses tended to be spread around patios; the more luxurious ones were compounds big enough to have one or several private courtyards, and perhaps even two storeys (a privilege reserved to noblemen).

The core of the city was divided into four districts or campans: Cuopepan, Moyotlan, Zoquiapan, and Atzacualco (see map below–I’m afraid it’s got one of the districts named wrong, but I couldn’t find anything clearer). Each district was in turn divided into calpulli [1]. A calpulli was a series of people related by birth and/or by profession, all living in the same area of the city: a tribe as well as an administrative unit. They had their own temples, marketplaces, civic centres, and their elders administered basic justice. We don’t understand yet all the ramifications between the calpulli or what kind of mobility you could have between them. I chose to make one of the characters in the book, Neutemoc–aka the social ascender–a member of a Tenochtitlan calpulli by marriage (his wife Huei being the one with the Tenochtitlan ties). My main character Acatl, being not only a priest but also the head of his order, stands a little apart from that particular system, but has retained some ties with his Coyoacan calpulli.

You’ll notice the presence of what seems to be another district north of the map. In reality, Tlatelolco was not another district, but the remnants of another city. Back when Tenochtitlan was founded, some of the Mexica disagreed on where to place the heart of the city. This opposing faction came to found Tlatelolco some kilometres north of Tenochtitlan itself. The cities cohabited peacefully for the better part of a century. But under Emperor Axayacatl’s reign, about 7 years before the story started, war broke out on a flimsy pretext, and the Mexica armies conquered Tlatelolco, all but absorbing it into Tenochtitlan. Tlatelolco was known for its daily market, set on a huge plaza where you could find anything from live animals to jewellery to ceramics. It had its own police system as well as its own court, which punished thieves as well as dishonest merchants. This market is where the priests in the book go for their daily rounds of purchases.

So, why Tenochtitlan? I briefly touched on Tenoch in the previous post, the semi-mythical leader of the Mexica who gave his name to Tenochtitlan, the capital city of the Empire. In reality, it’s a little more complex: like the name “Mexica”, there are several interpretations of the name Tenochtitlan. One of those is “The place of the prickly pear cactus”, and this refers to the founding of Tenochtitlan.

To understand why, we’ll have to backtrack a bit, and get back to Aztlan/Chicomoztoc, the mythical, paradisiacal place of origins. The Mexica believed that in times immemorial, they had lived in caves near Aztlan. They emerged from those to find their tribal god Huitzilpochtli, the Southern Hummingbird. Huitzilpochtli charged them with a mission to found a city to his glory. They set out, led by four priest-rulers, who were also the bearer of the idol of the god–and to whom he spoke in dreams. The Mexica migration was to take them over most of the Mexica valley: each time they settled down somewhere, disaster would strike, for Huitzilpochtli had a precise destination in mind, and would not let them grow soft among foreigners.

Several incidents are recounted, but the one that has the most bearing on Tenochtitlan is the battle against Copil: Copil’s mother, Malinalxoch, was an evil sorceress whom the Mexica had abandoned in the interest of the tribe. Her son came some time later to avenge his mother, but was defeated through the intervention of Huitzilpochtli, and his heart thrown into the marshes.

Generations later, the Mexica, hounded by the other tribes in the basin, had no choice but to enter the marshes, where they wandered around for days, dazed by fatigue and lack of food. In their moment of greatest despair, Huitzilpochtli spoke to them in a dream, telling them to look for his sign: an eagle perched on a cactus, which marked the place where they would found their city. The cactus had sprouted from the heart of Copil. It’s a striking image, laden with meaning: the cactus springs from an original sacrifice, which reinforces the link between blood and fertility. The fruit of this particular cactus, which is red and bud-shaped, also bears more than a passing resemblance to human hearts, and the fact that the eagle is feeding upon those is significant [2]. The eagle is also a symbol of the sun; and the vessels for holding human hearts were called cuauhxicalli, which means “eagle gourd bowl”. Taken together, all those elements form the Mexica ideal of providing nourishment for their god in the form of human hearts, either from themselves or from defeated captives. 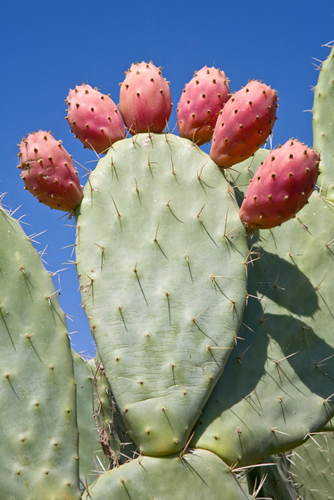 Thus the migration had led them back to Huitzilpochtli’s place of victory–where, with the god’s blessing, they founded the city of Tenochtitlan. It was the place where they would “keep guard, await, meet the people in battle (…), vanquish them all and make them captive.” From the beginning, Tenochtitlan’s mission was thus to be a base for the conquest of its neighbours.

That’s all for today. Tomorrow: the Sacred Precinct and Mexica religion.

[1]The singular is calpulli, the plural calpultin, but I’ll stick with just the singular to make matters simpler.
[2]Depending on the legend, the eagle can also be feeding on other birds, a clear symbol of the neighbours who must be conquered. The variant depicted on the Mexican flag has the eagle eating a serpent, with a symbology I’m a little unsure of (I may be wrong, but it sounds to me like Christian overtones, and pretty much the only source of that image seems to be a post-Conquest document)