Sunday
Ah, Sunday. Aka the big day, and not only because of the Hugos, but also because this particular day had me programmed on 2 panels, a reading, and a Hugo rehearsal–in addition to the pre-Hugos reception, the Hugos and the Hugo Losers party.

Eek, as they say. I started out by having a somewhat unexpected breakfast with Elizabeth Bear and two of her friends, in the park next to the con centre–being regaled with fun anecdotes about awards ceremonies and other writers. It was almost a disappointment to have to leave for my first panel of the day.

This one involved my showing a powerpoint to supplement Alter Reiss’s display of pottery shards (another case of “I don’t really know much about this but have to come up with something”). It went over–reasonably well, given the circumstances, I suppose. It did remind me of why I love archaelogy, and Alter was full of insights: the amount of stuff you can learn from a small shard is truly fascinating.

The next panel was on Writing in the Language of Others, and in French, which meant a total attendance close to the number of panelists–though M.D Benoit, Claude Lalumière and I had a brief talk on bilinguism before deciding to break up out of a common agreement, Claude having tons of things to do in preparation for the Hugo ceremony.

Traci, Matthieu and I then decided to go for a big lunch in a Turkish restaurant–awesome meat skewers, pitta and saffron rice–before heading back up for the rehearsals. The rehearsal itself mostly consisted of my being shown where to climb in the event of a win, and where to exit without falling over. I did get to hold a Hugo made out of a Pepsi bottle, which was hands-down the funniest moment of the afternoon.

It took more time than I’d have thought, leaving me little pause before my reading. This was another first exercise for me, and the con had very nicely given me a whole 25 minutes to enthral the crowd–shared with previous Campbell nominees David D. Levine and Karin Lowachee. I’d done a couple of test runs, read Mary Robinette Kowal’s awesome advice on the matter, and come to the conclusion that, making allowances for an enforced slow reading speed, 25 minutes should run to about 5000-5500 words.

I had no story within that range, and it did seem a little premature to read from the novel at this stage, so I just went for “Blighted Heart”, my Aztec-y zombie story published in Beneath Ceaseless Skies. (I hesitated over whether to read “Golden Lilies”, but decided that, given the high unease content of that one, I’d end up making half the audience run away).

OK, for a first time, it went well. I lost count of the horrible mistakes I was making when reading (including a rather embarrassing closing-up of my throat one sentence from the end), but I just plodded on, and dearly hoped it was still understandable in spite of my mangling. Good thing David had gone out for drinking glasses to go with the water they’d provided us, or I’d never have made it to the end. It came to 15 minutes; I had this feeling that I was going very slowly, but I suspect it was completely deceptive and that I was actually plowing through the text. 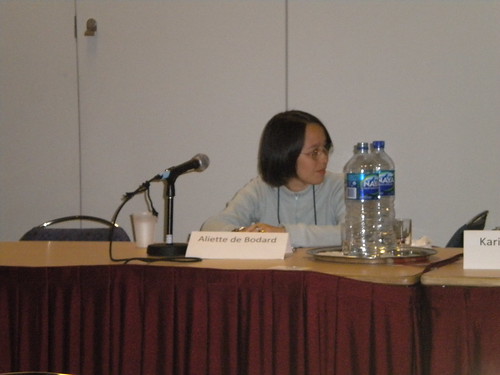 Me at my reading (courtesy of T.L. Morganfield)

After the reading was over, it was back to the hotel, to help Jenny change into party clothes, and then changing into our own clothes. We took pictures of Sandra and Howard Tayler in their evening dress, and bribed them to do the same. 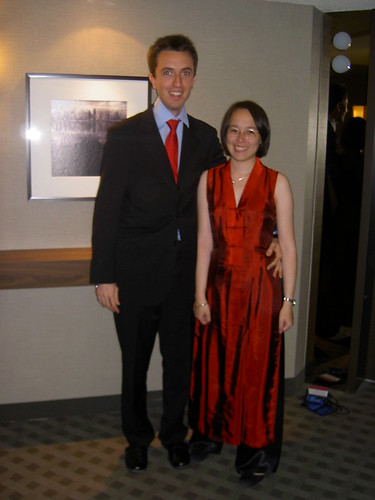 Hugo reception went well, even though I was completely frazzled by then and mostly going on automatic (I think I managed to speak to Ann Vandermeer for a good ten minutes and never realise who she was, and I’m pretty sure I did the same thing two or three times to different people in the two hours of the reception). 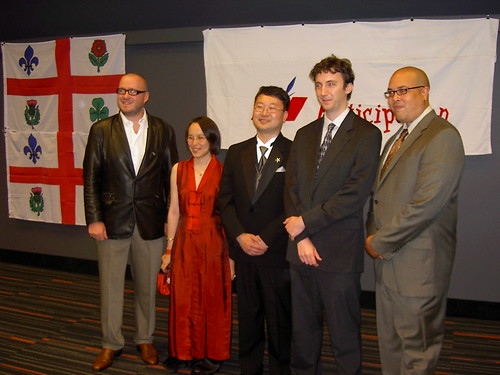 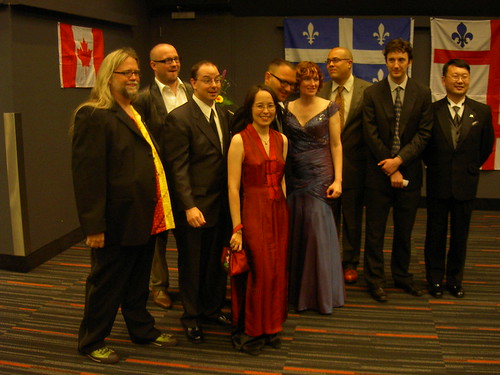 Hugos themselves–well, again, good thing they started with the Campbell, since I can’t imagine what it must have been like for the poor novel nominees, who had to wait during the whole evening to know whether they’d won. I’ve mostly gone over that ceremony in another post, so I’m not going to repeat stuff.

The post-Hugos is also mostly a blur–I never realised how tense I was until the tension went away (you’d think it was when David Anthony Durham was announced as the Campbell Winner, but in reality the tension didn’t go away until Weird Tales won for best semiprozine, thus freeing me of my role as Hugo acceptor for Interzone). The whole fatigue of the con came crashing in, in one big ugly blow, and only got worse as the evening went by: I did my best to stay awake, but around midnight I had to call it quits and head back to the room for some sleep. It’s a pity, because there were lots of people milling around; and it was a way more relaxed environment than the party rooms for chatting. 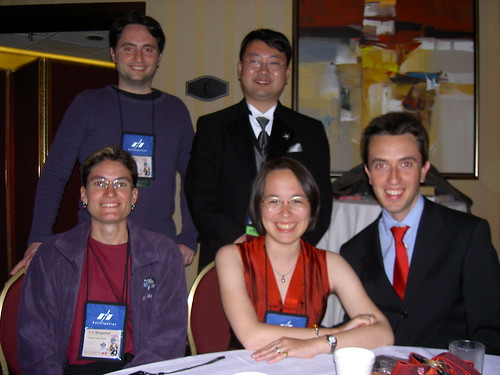 Ah well. Another time (when someone I know is nominated for a Hugo and I can insert myself 🙂 )

Next and final episode: the day after.