I couldn’t make it to the Codexian breakfast Saturday morning because I had an early panel about medieval technology. I had expected it to be sparsely populated like my previous panels–however, no such luck, as I found when arriving that the room was packed…
After a brief introduction, the moderator suggested that my co-panelist (Phil Nanson, an expert in medieval weaponry) and I each started out by giving a 20-minute talk on the subject, and follow up with questions.

You see, I can give a 20-minute talk on a subject I reasonably master, but the key word is “preparation”. While I had scribbled down many notes on the subject, the notes had been planned for a discussion: i.e., in a certain degree of disorder and without any unifying thread.
I think that’s what my speech ended up looking like, too…

Nevertheless, once the audience started asking questions, it went a little better–we even convinced Kari Sperring to climb up there with us and explain medieval mills, which was awesome.

One key lesson of this panel was that I’ll be wary of stuff like this next time: I’m a writer, and my job is to know enough about a time period to fake it in a book; there were plenty of people in the audience who hold PhDs in archaeology or history, and/or have an abiding interest in the subject–and I think they would have looked much better on subjects like this than I did.

I did a quick run-in in the Dealers’ room, where I found two of my fellow Campbell nominees signing their books: Felix Gilman and David Anthony Durham, sitting side by side, which made for a neat opportunity to talk to both of them 🙂

Then I had a quick and delightful interview with Carol Ann Moleti, and went on to my noon kaffeelklatch. I had no high hopes of attendance either, and was hoping for an early lunch if no one showed up. But Pat Lundrigan and stevndj had very kindly signed up, and we had a cool conversation about Heinlein and favourite SF for an hour (by far the least populated kaffeelklatch in the room, but it was a lot of fun).

T.L.Morganfield was signing at the SFWA table, so I used that opportunity to get autographs on my copy of Paradox and Shock Totem, and we headed down to grab some lunch in the Chinese district. There was this awesome place which did handmade noodles–mmmm…. Delicious. I so wish we had that in Paris.

My next panel wasn’t until 5pm, so I spent more time in the Dealers’ Room–where Tony Pi notified me that all the Campbell nominees were going to have a fight to work out who the winner was going to be. I then made a rather bad calculation mistake, and agreed to a 7pm meeting–when my 5pm panel ended at 6:30, and I was supposed to grab the LH crowd for dinner right afterwards. Of course, I didn’t realise this until long after Tony was gone…

The 5pm panel was about Researching Your World, and there were 5 of us on it, which was where I discovered one of the difficulties about panels no one had told me: getting the floor when you’re shy and when four other people also want the floor… Upshot is, I listened a lot until SM Stirling left at 6pm–with only four panelists, it made it a little easier to insert myself into the conversation. It was a very interesting panel, with a lot of different points of view on the subject; and perhaps next time I’ll work out something for putting in my bit without feeling like I’m interrupting someone and being terribly impolite… 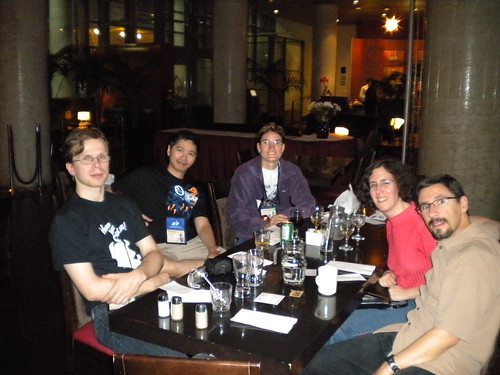 The LH posse at the restaurant (minus me who had absconded, and Matthieu who was taking the picture) 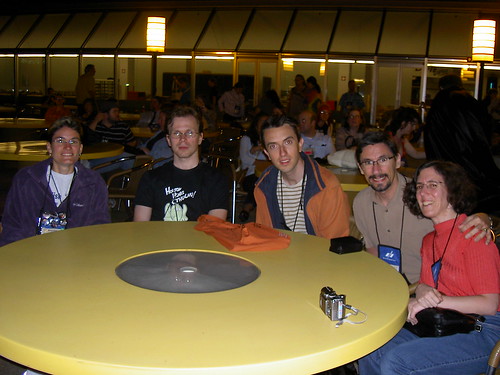 The LH posse at the fireworks(minus I, who was taking the picture, and Rod Santos) 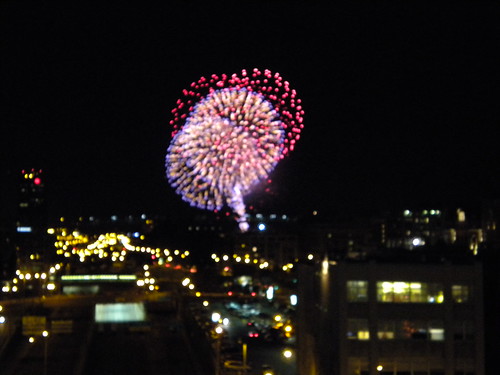 Other than losing Rod Santos at some point in the proceedings, I finally did get to spend the evening with the LHers, which was great. It was pretty relaxing, too, for a change: no background noise, a superb backdrop in the shape of very neat fireworks, and plenty of time for conversation.
We headed back to the hotel around midnight, and decided against the parties–mostly because the following day was the Hugos.
Next episode: pottery. Reading. The Hugos!