So… as people might have noticed, I was Guest of Honour at Finncon 2013 in Helsinki. This was my first stint as a GoH, and all I can say is wow. This set a really high bar for GoH gigs. 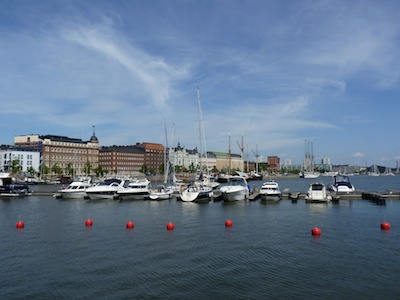 The H and I flew into Helsinki on Wednesday afternoon (after a brief negotiation session with the airline, who for some reason had decided I was too far along in my pregnancy to fly and dubiously eyed my gynecologist’s certificate that I could fly). After resting in the hotel, we headed to Harald, a Viking restaurant complete with plastic helmets, where we met the con people and the other guests of the convention (Peter Watts, Caitlin Sweet, Finnish author J. Pekka Mäkelä, academic Stefan Eckman, Cheryl Morgan and Swedish authors Mats Strandberg and Sara B Elfgren), and had lots and lots of food, complete with Viking roleplaying game in which many speeches were made and some rotting shark meat was consumed (by Peter, who drew the short straw on this one, but who got to be initiated as a Viking with a nifty certificate).

Thursday was the day of the press conference at the Helsinki Museum of Contemporary Art Kiasma, where I saw hard copies of my Finnish short story collection, Perhonen ja Jaguaari (The Butterfly and the Jaguar), met my publishers (Osuuskumman is a publishing cooperative, which means many members!), and had a lovely interview about World SF. This was followed by a cruise around the Helsinki archipelago (wonderful landscapes), a quick shopping trip to find the Moomin shop (which resulted in the acquisition of an apron), and an evening spent at a sauna. I couldn’t do the sauna thing, sadly, but it looked like an experience–after finishing in the sauna, participants took a dip in the nearby (icy) sea and emerged much reinvigorated, and about ready to try the wonderful buffet of Finnish delicacies (courtesy of Hanna and Maya), which included moose meatballs, Karelian cake (pastry and rice. I was in love), cranberry fizzy drink (which actually tasted like berry and not like sugar), fresh mushroom pie, and a variety of barbecued food (the stuffed mushrooms wrapped in bacon were a big hit, very nicely juicy and tasty).

Then it was time for the con proper, which lasted over three days. The Cable Factory is actually a series of rooms spread around a courtyard, which made for interesting going-arounds (you had to go in and out of buildings); the dealers’ room was *huge* and stuffed with entirely too many books (I resisted temptation, but the H succumbed). All in all, it was a very busy event, and I’m sorry I had to miss on some of it (naps were my best friends, and panels can be pretty draining!). I was joined at the hip to Tom Crosshill, for some odd reason; we did a short story workshop together (my first teaching experience!), an GoH interview, and a bunch of panels. The English-language track was very interesting: we went to a hilarious panel about TV series that never were with Cailtin Sweet and Karin Tidbeck, and attended  Peter Watts’ GoH talk about researching Blindsight full of interesting science tidbits, and I got to catch up with Karin Tidbeck and Nene Ormes (who has such beautiful covers for her Swedish urban fantasy series that I wish I could actually read the language!). At least it looks like Mats and Sara’s book, The Circle, is available in English; I’ve bookmarked it for future checking-out. There was also some great costuming going on; the T-Rex has got to be the most unforgettable costume I’ve ever seen (complete with sound effects!), but you also had Zelda, Harley Quinn, Iron Man (shown here in the Tardis!), … I had to miss on the parties due to major fatigue crashes, but I did manage to make the Dead Dog Party Sunday night, in which much fun was had (and many fajitas consumed). Overall, a really great experience–thanks to all organisers and the attendees, and I hope to make it to another Finncon where I actually try the sauna and eat the smoked fish (and party until the end of the night, though I realise that is unlikely to happen any time soon…)

Oh, and if you want more Finland in your conventions? The same team (or at least a team with a significant amount of overlap) is putting in a bid for Worldcon in Helsinki in 2015, which looks set to be a truly awesome convention (plus, come on, you know you’ve always wanted to try a sauna by the sea). If you’re involved in Worldcon site selection or want to be involved, can I suggest checking them out?

(other people can correct me on this, but it looks like you have to be at least a supporting member of LoneStarCon 3 to vote? The instructions here seem to indicate there’s an additional fee involved?)