So, finally… (apologies for the tardiness of this, I was very, very busy throughout last week, and when I finally had some time, I couldn’t get hold of the pictures Matthieu had taken).

Imaginales is a French con dedicated to fantasy (its “sister” con, Utopiales in Nantes, is more focused on SF). I’d never been before, but Stéphanie Nicot very kindly invited me, and so gave me the opportunity to discover Epinal.

Imaginales is pretty much the event of the weekend in May: you arrive at the train station and face the first of many billboards advertising the festival, listing all the authors. Unlike Anglophone cons, which are often put together and run by dedicated fans, Imaginales has the support of the town hall (and area council, …), and they put on quite an amazing show. They have strong ties to the restaurants, hotels and high schools of the area (teachers organise visits; authors drop by for chats, and every year artists paint a fresco which is later donated to a high school); and entrance to the event is free for everyone, which insures a very steady flow of local people curious to see the wares. There’s even a special Imaginales vintage (repackaged wine probably, but still cool).

Pretty much the centrepiece is the book tent, which is a ginormous space with a looooong set of tables, where each author has a spot: you sit there behind your books and sign stuff for whoever feels like buying. It helps if you think of it as a cross between a book fair (a Salon du Livre, if you’ve ever been) and an Anglophone con: there are a few events on programming (2-3 tracks), a gaming tent, and a café area, but the heart of the show is the book tent. 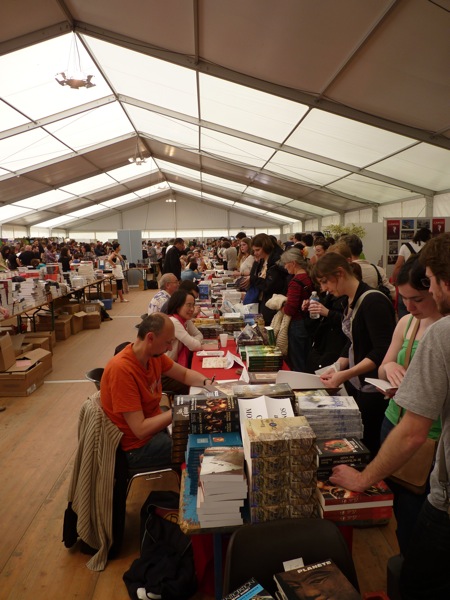 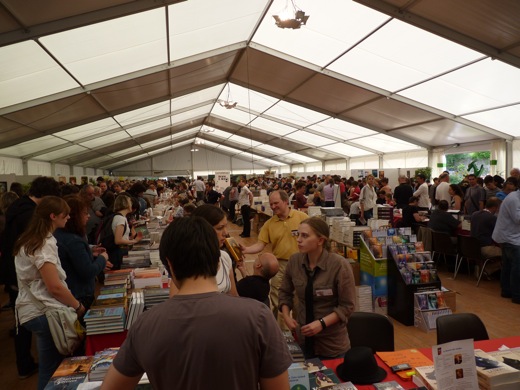 Two views of the book tent with authors signing (and yes, if you look closely at the first pic, I’m the second author on the right, behind the man in the orange T-shirt)

As an opportunity to meet readers, chat and peddle books, it’s pretty much invaluable; though I did feel it was a bit less convivial for meeting other authors, since you do end up sitting behind your table most of the time, and the café area is small and mostly used for restful moments rather than for impromptu meetings (unlike Utopiales, where everyone ends up in the bar). Might just be me; especially since I have close to zero experience of French cons, and don’t know many people in the French publishing industry either. And because of… 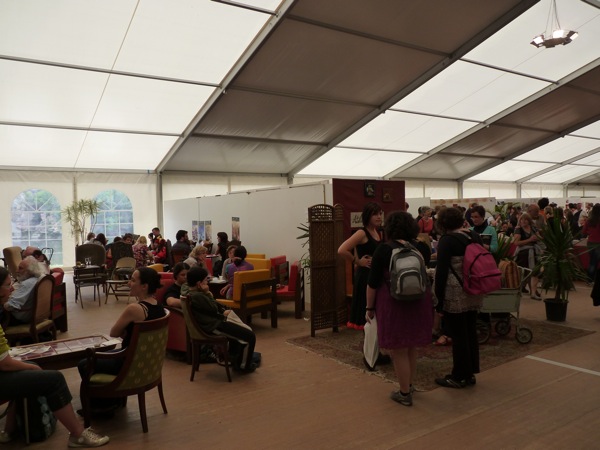 The small café space to the left of the book tent 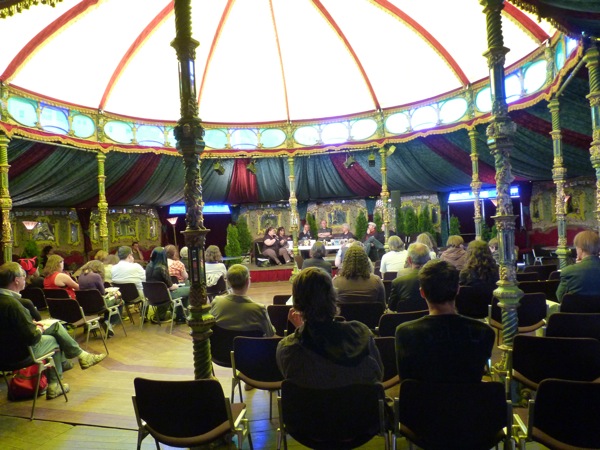 The magic mirror (aka the space for panels)

Well, to put it bluntly, it was also a very bad idea to do the Nebulas and Imaginales back-to-back, since I arrived pretty much knackered from the Nebulas, and not in a mood for socialising (I’m not the world’s most social butterfly, and two weekends of constantly reaching out to people does take its toll, especially if you factor in jet-lag).

In spite of all of this, it was an amazing event: I had a very cool panel on “Rewriting History” with Eric Holstein, Johann Heliot and Pierre Bordage, where we discussed alternate histories; and a nice, well-attended interview with Stéphanie Nicot on “Being French and writing in English”. There was also great food in the many nice restaurants of Epinal–we had awesome couscous, flammekueche(s), cakes, … And, of course, I saw old friends, met new people (including a couple of Anglophones invited by the festival), and generally had a great time.

We also acquired a ton of books–the H is currently engrossed in Pierre Bordage’s latest space opera pentalogy, “La Fraternité du Panca” (The Panca Brotherhood); and I have the complete set of Elisabeth Vonarburg’s “Reine de Mémoire” (Queen of Memory), an amazing alternate history of France and its Indochinese colonies. Promises many sleepless nights…

So, awesome con; just that next year, I will make sure not to do two events back-to-back…