This is part 4 of a series of posts on the setting of my Aztec fantasy series Obsidian and Blood, as a leadup to the release of Book 1, Servant of the Underworld, published by Angry Robot/HarperCollins (more information here, including excerpts and a book trailer). You can find part 1 (the Valley of Mexico) here, part 2 (the city of Tenochtitlan) here, and part 3 (about the Sacred Precinct and religion) here.

4. Acatl, and death in Mexica religion
My main character in the book is Acatl, High Priest for the Dead, who has the responsibility for investigating magical offences in the capital city of Tenochtitlan.

The word Acatl means “Reed”. It’s shorthand for his actual name, which is his date of birth in the calendar: Chiquacen Acatl, which means “The day Six Reed” [1]. I chose that name back when I was first writing “Obsidian Shards”, the very first story that featured him, for a number of reasons. The first is the association with the god Quetzalcoatl, Ce Acatl Topiltzin (see previous article)–who, among other things, was the patron of priests and of knowledge. The second is the symbolism of the day Six Reed itself: it has associations both with Mictlantecuhtli, the god of death (Acatl’s patron), and with the god of Justice–a fitting set of protectors for a death priest engaged in the investigation of magical crimes. [2]

Acatl’s patron is Mictlantecuhtli, the god of death. His name means “Lord of the Place of Death” (which I’ve shortened to “Lord Death” in the book for ease of reading), and he is one of the gods associated with the end of life. You can see a picture of him below, with the characteristic skeletal look. 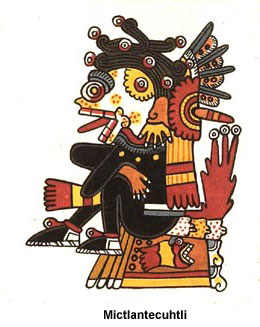 The Aztec death system, like its religion, is complex. The basic idea is that there are several destinations for the spirits of the dead. What determines where someone ends up isn’t the respect of a particular morality (as in Christian religion). Instead, the only separating factor is the manner of death.

For those happy few who died in battle, their destination was Ilhuicatl Tonatiuh, the Heaven of the Sun. This included warriors who died on the battlefield, most sacrifice victims, as well as women who have died in childbirth. This last one can seem odd–but for the Mexica, childbirth was a struggle to bring a captive (the baby) into the world, an activity as dangerous as fighting other warriors in an effort to secure prisoners for sacrifice. Once ascended, the men would accompany the sun to its zenith; the women would then take over, from zenith to sunset. After four years, the spirits would come back into the mortal world: the men as butterflies, the women as moths. Below is a statue of a woman who has died in childbirth–transformed into a Cihuateteo, a fearsome female deity. 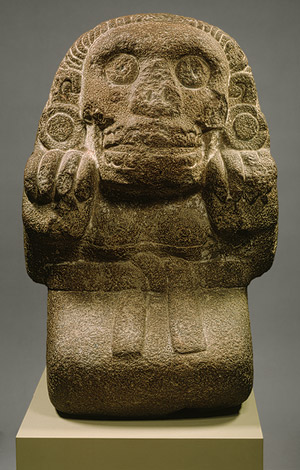 Another possible destination was Tlalocan, a watery paradise ruled by Tlaloc, the god of rain and storms. Those destined for Tlalocan had died of drowning, lightning strikes, and associated diseases (such as dropsy). There, they would enjoy the bliss of a land where crops bloomed year-long–Tlalocan is very much a peasants’ paradise, as Ilhuicatl Tonatiuh is that of warriors.

The babies who had died while still breastfeeding would go to Omeyocan, the Place of the Duality, where the supreme gods Ometecuhtli and Omecihuatl would keep their spirits until they could be reborn after the end of the current age. In Omeyocan, the babies would suck the sap from a huge tree, as they had sucked milk from their mothers’ breasts. You might wonder what is the significance of breastfeeding: the answer is that it goes back to the link between blood and fertility. Those children are the ones who have never tasted the fruit of the earth–the fruit that have been sprouted thanks to the blood offerings of men. Hence, those babies have no debt either to the earth or the sun, and their spirits exist in a state much like the Christian state of grace.

You’ll notice that this barely covers any people at all. What of all the other spirits? The vast majority of people, those who did not fall into any of the categories outlined above, would go down into Mictlan, the Place of Death, or the underworld. This was a gloomy, cheerless place split over nine levels–from the entrance all the way down to the palace of Mictlantecuhtli and his consort Mictecacihuatl. On each of those levels, the spirit would face a gruelling trial. After four years of tribulation, the spirit reached the last level, where it was finally allowed to dissolve.

I adapted some of Mictlan’s trials into the underworld creatures Acatl deals with. The Wind of Knives, an elusive creature made of obsidian shards, corresponds to level five, where a wind as cutting as broken obsidian would tear the spirits apart. The beasts of shadows, with their taste for human hearts, come from level eight, where the spirit had to present a jade heart in order not have their own devoured by beasts.

Acatl himself takes on functions that pertain to all those places, since he investigates into magical crimes regardless of where the spirits might have gone (though he has access only to those spirits who have entered Mictlan, which can hinder him in his inquiries). I also gave him the more prosaic role of organising funerals, and helping the spirits’ passage into Mictlan. [3] Below is a particular form of funeral: a mummy bundle, which consists of putting the body in a foetal position, wrapping it in layers of clothes, and adding ornaments such as jade stones (the manner of disposing of the body also depended on the manner of death, but I’ll not go into details here). 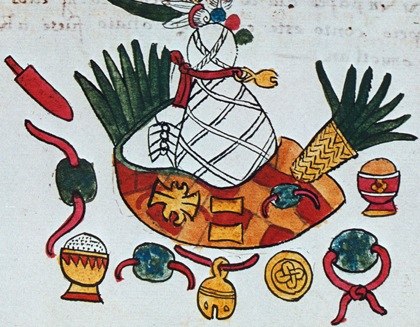 And that concludes this series of articles about Aztec history–remember, Servant of the Underworld is out today if you want to check out what I did with all this nifty research. (order now–tell your friends–etc. :=) )

[1] The Mesoamerican calendar is a fascinating and complex system. I refer you to The Aztec calendar or Marie Brennan‘s article in Strange Horizons for brief introductions.
[2]In the series, I had to strike a balance between the Mexica fondness for tongue-twisting names, and readability for a Western audience unused to words of more than 4-5 syllables–so a lot of names were chosen for phonetic reasons and not because of any particular meaning.
If you’re curious, the names that do mean something, apart from Acatl and the gods’ names, are Ichtaca (“secret”), Mihmatini (“prudent one”), Palli (“leaf”), Teomitl (“arrow of the gods”), and Tizoc (“chalked leg”]). I’ll put up a character index at some point, promise.
For much the same reason of readability, I also fudged the rules for tacking on the honorific “tzin” at the end of a name (there’s a series of non-intuitive ways to tie together a noun and its “tzin”, but I figured I’d go a little easy on that before my readers went crazy).
[3]I fudged a bit here. There is, in reality, little evidence of a wide religious body associated with funerals. There is some reference to people who burnt bodies on pyres, but they seemed to have been officials rather than priests.